The Slovenian flags were fluttering along the route of the Tour de France on all stages of the bicycle race. Slovenian fans flooded the streets of Paris and other French towns and villages. The great winners of the Tour are Tadej Pogačar and Primož Roglič. In addition to these two champions, we are also proud of the performances by Jan Polanc, Matej Mohorič and Luka Mezgec. There was not a dry eye in Slovenia when the national anthem was heard upon the raising of the flags at the ceremony in Paris.

Tadej Pogačar did not only win the yellow jersey, but also the polka-dot jersey as the race’s top climber and the white one awarded to the best young rider.

Primož Roglič won several stages, and everyone already saw him as the winner. But on the penultimate day, he was overtaken by his Slovenian compatriot, Tadej Pogačar.

Despite his personal defeat, Roglič proved to be a great man and a mature athlete. At the end of the race, he said with sincerity that Pogačar was better at the end.

The latter admitted that Roglič had always been his role model and he would remain one in the future.

We can assert with certainty that both of our champions are lions in their hearts, although only one of them raised the stuffed lion in the end. Symbolically, Roglič was holding his son, Lev (lion in Slovenian), in his arms while standing on the podium.

Someone wrote on their Twitter account: "It’s a good thing there’s only two million Slovenians. If there were more, no medals would be left for others. In all sports."

Of course, this is an exaggeration, but when listening to the national anthem and when Pogačar raised the Slovenian flag high in the air, we all breathed as one.

Numerous fans flew to the French capital, others went by cars and some by buses. Majority of them came on their own and it is impossible to assess how many fans were actually in Paris. Certainly many.

The fans were unable to attend the award ceremony due to COVID-19 measures, but we were represented there by Borut Pahor, the President of the Republic of Slovenia, and Dr Anže Logar, the Minister of Foreign Affairs, who attended the ceremony at the invitation of Emmanuel Macron, the President of the French Republic, and Jean-Yves Le Drian, the French Foreign Minister.

Sparkling wines were opened in Slovenia as well

The yellow flag was fluttering from the Presidential Palace in Ljubljana, children and adults wore yellow T-shirts, and banners were adorned with the names of both aces and messages read, "You both made us proud", "Slovenia is yellow", "Primož Roglič and Tadej Pogačar", etc.

It was particularly festive in Komenda, the hometown of Tadej Pogačar, and also in Kisovec where Primož Roglič is from.

The triumph of our boys will delight us Slovenians for some time. 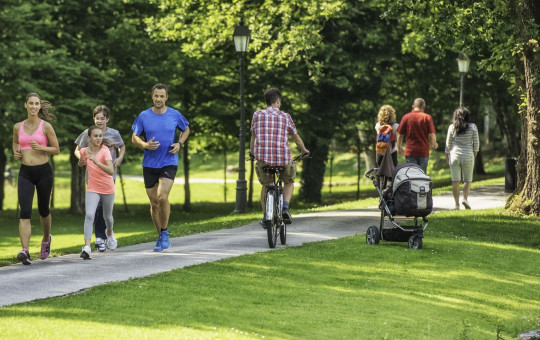 Day of Slovenian Sport – forging links, getting together and strengthening national identity 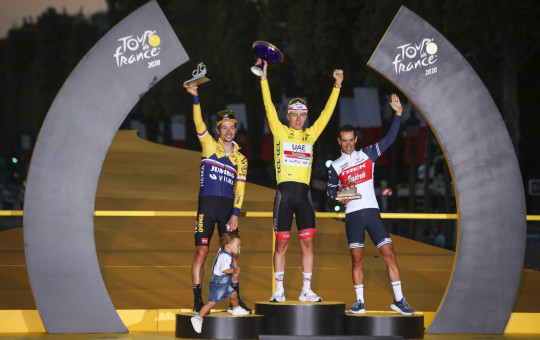