It deals primarily with Slovenian 20th-century art from the beginnings of Modernism around 1900, but also with contemporary artists who continue the Modernist tradition.

The Museum of Contemporary Art covers contemporary practices in the field of the visual arts. It presents new content and new ways of expressing, exhibiting and interpreting contemporary times.

The museum was founded in 1947 as a museum of modern art. The initiative for the construction of the museum and exhibition ground was put forward by the critic, art historian, author and diplomat Izidor Cankar, and the construction was funded from the bequest of industrialist Dragotin Hribar. The new building was designed by Edvard Ravnikar, one of the most renowned Slovenian architects of the 20th century. Ravnikar designed the building as a white cube. The architecture reveals the influences of Slovenian architect Jože Plečnik, while elements of rationalism and functionalism, deriving from the architectural modernism of Le Corbusier, are also noticeable.

In 1941, the construction works were brought to a halt by the Second World War. The Museum of Modern Art was officially opened on 30 December 1947.

Already in 1951 the first permanent exhibition of Slovenian art from Impressionism until 1950 was presented to the public. With Slovenia's independence in 1991, the Museum of Modern Art became the principal institution of Slovenian modern and contemporary art.

Due to a growing shortage of space, the Ministry of Culture granted the Museum of Modern Art the use of a former military facility in 1995. The Museum of Contemporary Art Metelkova, the second venue of MG+MSUM, was then opened in 2011. MG+MSUM thus divided its activities into modern and contemporary art.

The exhibition venues differ in historical development, collections, cultural and political contexts and re-evaluation of modernism and contemporary times.

The partners of MG+MSUM include BOKS – društvo študentov za kulturno umetniško dejavnost (the students' association for cultural and artistic activities), the Igor Zabel Association for Culture and Theory, the University of Ljubljana and the University of Maribor, the International Centre of Graphic Arts Ljubljana, the Centre for Architecture Slovenia, the Slovenian Museum Association, ICOM, CIMAM and many more.

MG+MSUM is active in the fields of modern and contemporary art.

Today's vision of MG+MSUM is based on its history from the founding to the breakup of the former Yugoslavia and the establishment of independent Slovenia.

It deals primarily with Slovenian art and research, covers contemporary practices in the field of the visual arts, and presents new content and ways of expression. By continuously acquiring works by Slovenian artists, it further enriches the collection of Slovenian 21st-century art and enables interpretation of the contemporary era.

Art from the gallery's storage and on display in the exhibition space pave the way for the future of Slovenian art. Slovenian artists learn from masterful teachers and through their incredible talent they transform the acquired knowledge into something new and uniquely inspiring.

Slovenian art is like a driving force that encourages Slovenian artists to keep exploring new paths in art.

Better, the same? No, just interpreted in a new way. 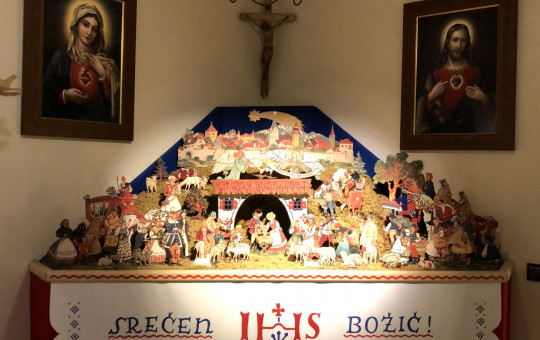