At the initiative of the Ministry of Culture, the Government has declared 2023 the Year of the Poet Karel Destovnik Kajuh. The national commemoration of Kajuh's year, which will pay tribute to the poet's creativity and his role in the Slovenian nation’ collective consciousness, will coincide with the 79th anniversary of his death. Next year will thus round off a roster of events and projects that took place already in 2022, when we celebrated the 100th anniversary of the poet’s birth.

The literary work of Karel Destovnik Kajuh (1922–1944) is not only a document of the time, but also a testament to the deepest, purest and timeless humanity. Although his poetry cannot be separated from the historical time in which it was bound, it goes significantly beyond the level of mere identification, as it records the internal tensions of that time with extraordinary precision and thus transcends it.

Due to his premature death, Kajuh did not write many poems, but in his poetry he uses remarkable clarity and expressive power to portray the feeling of the world that was characteristic of a large part of his generation. The poet calls for collective identification, writing poetry that is strongly oriented towards social impact, yet that is not merely declarative, but is also felt viscerally. In his poetry, he intertwines the themes of his inner, intimate struggles for love, family relations and fear of death with the tensions of ideas, community and the social world of his time. It is precisely because of his sensitive and sharp dynamics between intimate feelings and extroverted collective acclamation that we place him among the most important Slovenian poets.

The poetic opus of Karel Destovnik Kajuh is typical of a representative of Slovenian literature in the first half of the 20th century, but at the same time transcends distinctly lyrical and literary interpretative elements and is strongly linked to real political developments in the Slovenian, European and global environments of the 1930s and 1940s. In his poems (especially in the early period), he substantively relates to the expressionistic orientation of the lyrical subject into the inner world, which is based on the motifs of distress, internal divisiveness, the premonition of a catastrophic future, paradoxically connected with youthful optimism of feeling the present. However, already in the pre-war period, Kajuh's lyricism is distinctly real politically engaged, impregnated with the poet’s understanding of social realism, the Slovenian nationality issue and, above all, social and socially engaged themes.

Like many poets of that time, Kajuh embraced more modern and avant-garde and stylistic elements of the era, and especially in the early period of his work, the influence of Russian revolutionary poets, including Vladimir Vladimirovich Mayakovsky, can be felt. His work, aspirations and desires are expressed through ethical experiences and the concept of the new man (e.g. the poem Ko človek bo človeka prepoznal) who, because of his own desires and because the influence of the time and conditions in which he found himself, will overcome the old and crumbling world. Kajuh would often renounce older and classical poetic elements and make a complete break with the classical structure of the lyrical form (e.g. the poem Drobna pesem), and there are also instances of breaking with the old in terms of content. To familiarize the reader with the theme, he often uses regionally coloured and thematic elements that are mainly connected to the rural and working-class world.

Like other important representatives of Slovenian literature of the time (here Srečko Kosovel and Prežihov Voranc appear as the most comparable authors in terms of content), Kajuh also stylistically makes excessive use of expressionistic aesthetics in his poetry, which, especially in the poems related to wartime, does not appear grotesque, but, because of the impossible and almost absurd conditions, takes on a mobilising and national-awakening feature. The effects of the ugly, the overwrought, the incongruous and the seemingly grotesque (e.g. the last stanza of the poem Poglobimo boja struge) do not work with Kajuh in the same way as with other authors, where this motif is used to show the horrors and the worthlessness of the world (e.g. An Event in the Town of Goga by Slavko Grum; a grotesque in this form also occurs with older authors, the most eminent from them being the much older Edgar Alan Poe). With its effects of the ugly, the overwrought, the incongruous and the grotesque, Kajuh creates a complete reversal of what one would expect from such texts: on a subtle level, they acquire a positive note with the purpose to show the reader naked, yet genuine emotions, and to enable as radical an identification as possible with the subject who suffers in the poem.

Although he died at the age of only twenty-one, Kajuh's poetry can be divided in terms of style and content into two distinct periods: the pre-war expressionistic period and the inter-war period of the final formulation of his political stance, during which he also reached the peak of his poetic creation, which was interrupted by his premature death. It bears mentioning that his phase marked by expressionism and social realism is not at odds with his lyrical phase of partisan motifs”, but these phases rather complement each other, and it is quite possible to argue that his partisan lyrics are merely a metamorphosis and progression of his pre-war motifs.

The National University Ljubljana will be hosting an exhibition entitled Time to Live and Time to Die: Karel Destovnik Kajuh (13 December 1922 - 22 February 1944), taking place from 22 December 2022 to 6 May 2023. Kajuh's manuscript legacy is stored in two locations: the NUK Manuscript Collection and the Velenje Library, which also keeps material privately owned by the Mešič family. The exhibition, which is being held in cooperation between the two libraries and will be on display at the National University Library from 22 December 2022 to 6 May 2023, presents Kajuh's life and work through a comprehensive selection of photographs, personal documents and manuscripts of his poems, letters and correspondence. Magazines, publications and books featuring his works will be on display as well. 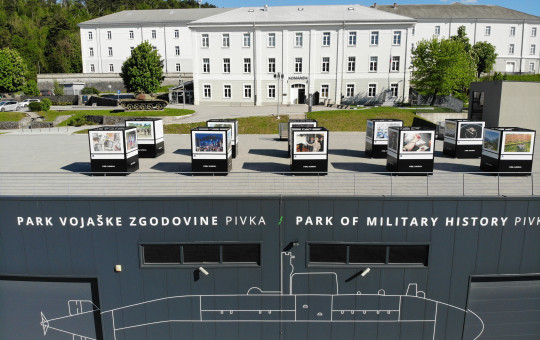 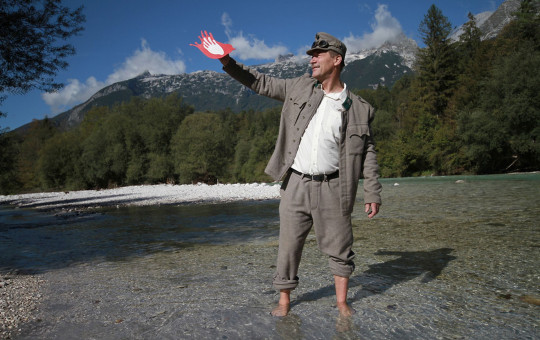